Below is an interesting dialogue between our marketing manager and me on the topic of Bulleyes Framework VS 80/20 after both reading the book: Traction.

Starting question: Does the Bullseye Framework go against 80/20 Principle? 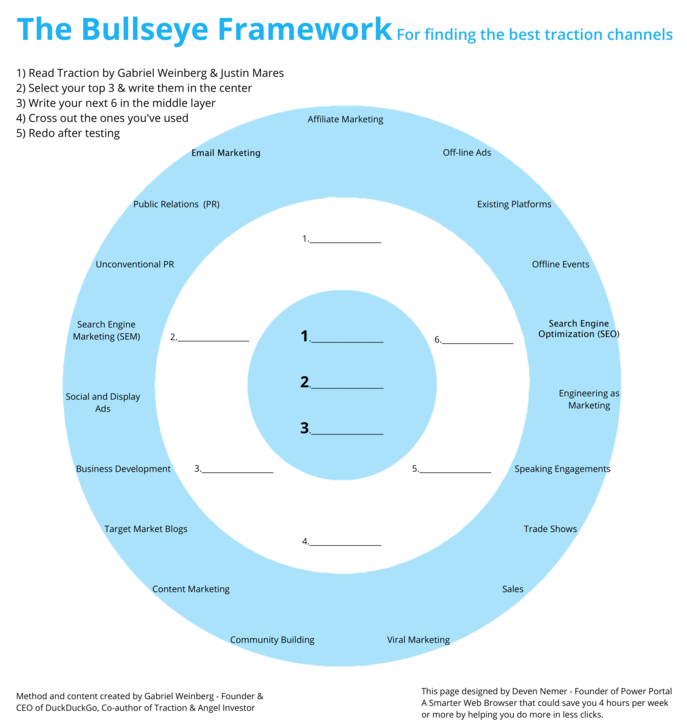 Karl: I think the Bullseye framework incorporates 80/20 Rule deep in its concept because:

1.1) One suggestion that is part of traction channel testing is: Look for customers where others aren’t looking. I think this also validates 80/20 rule since if most of your competitors are doing the same thing, then the high competitiveness will result to Law of Shitty Clickthroughs.

If you look for customers where competitors aren’t looking, then you’re trying to find the channel that can give you 80% result with 20% effort.

2) After the Bullseye concept, another critical concept mentioned in the book is called the Critical Path. Basically this says that for every traction channel you decide to go into (the ones in the top 3), you need to:

I think this is also 80/20 because if after re-assessing the critical path, you find one milestone that will require a lot of effort but will only get you a very small step closer to your traction goal, then you should skip it and jump to the next milestone along the critical path.This will ensure that the critical path will stay critical and all the steps you take is contributing hugely to your path towards the goal.

Example: For Shopline affiliate program, the traction goal is 1000 affiliates by end of 2016. Then a rough critical path could be:

So if we assess the critical path along the way, let’s say after number 3, and we realize that the feature to let affiliates export their leads for better tracking and analysis IS NOT something that should be critical anymore, we should skip it and jump to the next big task that can help us achieve the 1000 affiliates traction goal.

I think this is very 80/20 in terms of how you pick your battles. Always go with the things that can provide the biggest boost towards your traction goals.

1) How are we selecting the top 3 channels? What if we pick the wrong ones to go all out?

2) Although it’s kind of 80/20 in selecting channels, going all out into an individual channel still goes against 80/20? There are still things that are in the 80% portion even in primary top channels?

3) Does this bullseye approach actually only apply when resources is very limited like in very early-stage start ups? Is it still applicable for our stage? My bigger question is: When to hire and expand resources? When to go with bullseye approach and go laser intense into certain channels?

4) It seems to be that bullseye approach kind of treats each channel independently, which is often not true as channels are inter-related and assisting each other. I believe our customers come to us via multiple channels and by cutting back on some seemingly less important channels, will it reduce the effectiveness of the primary channels in the end? The assisting effect of a channel is harder to measure and often underestimated especially when we only look at last click attribution?

5) Even if we select the right top channels to work fully into, how do we predict when they get fatigued and saturated and become less effective at some point? I assume each channel will be once very effective and will die out at some point?

6) Along the line as point number 5, when going with the bullseyes approach, will we become more and over reliant on certain top channels and thus increasing business risks in the long term? What if we failed to react and find out about new top channels before the current ones die out or become less effective?

It is at this stage where you test all 6 channels with low-effort and cheap tests to see if the channel could bring you traction at the current stage of the company. If you find 1-2 channels that resulted to positive ROI and high potential volume of customers, then they move on to the innermost circle where you go all out. With this approach, the possibility to go wrong if you already did traction channel tests will be lower.

2) I don’t fully understand your question. Isn’t focused efforts the principle behind 80/20?

3) I think the examples in the book focus a lot on early-stage startups BUT its core idea still applies to mature startups. Essentially, even if a startup already gained significantly from the first traction success (let’s say double the paid user base), the growth will not be accelerated anymore since the channel strategy could be saturated. At this point, the old traction strategy stops moving the needle and you will need to do the bullseye framework again to determine which traction strategy will bring you the next round of traction.

“This is additionally confusing because oftentimes focusing on your core channel involves channel strategies that utilize other traction channels. You’re using these other channels to support that strategy, as opposed to pursuing multiple traction strategies at once.”

5) I think this would depend on the traction goal. If you reach your traction goal and don’t think you can milk any more than what you’re currently getting, then it should be a good time to re-do the bullseye framework to see at your current stage, which new channel strategies can move the needle towards your new goals.

6) I think this is a valid question. But there is risk in everything, including spreading your resources too thin and going into every suitable channel.

Additional comment: The book started by stating that startup founders should give 50% effort on product and 50% effort on gaining traction. Both product and traction should feed into each other create optimal growth.

After my last follow-up answer, we just discussed face-to-face and came up with the following conclusions: